I’ve been having an affair with smoked gouda lately. Smoked cheeses are to me what a good bloomy rind or soft cheese is to many cheese lovers: I know it’s unhealthyish territory, but like a good Downton Abbey binge or a *ahem* smokin’ bad boy, I just can’t get enough. (Okay, the bad boy part is more a cliché than true in my case. Unless Jason Statham is lurking nearby.)

But we’ll get to the smoky part. First, gouda. It’s like the quirky cousin of everyday mozzarella: Semi-soft, super melty and just enough flavour to allow it to shine in a dish, without needing to be the centre of attention. But gouda’s slightly tangy tinge gives it an edge and makes it a beautiful, while still accessible, option when you need the versatility of grocery store brick mozza, but want a bit more pizazz.

Over the past two months, I’ve used it in soups, sandwiches and salads, but my favourite option has to be the simplest: Grilled cheese. I layered my favourite thin multigrain bread with baked apples (I just threw them in the oven for a few minutes in a tinfoil pouch – this way you don’t need to wait for the apples to soften while you’re cooking the sandwich) and the smoked gouda. It’s also delicious with a bit of grainy mustard, but I opted for the more simple version this time.

My favourite part of building grilled cheeses is deciding which dipping sauce to serve it with. In this case, I was craving something sweet and tangy to bring out similar flavours in the gouda and apple, while complementing the smokiness. My usual cheese accompaniment, apricot and jalapeño chutney, would’ve been fine, but adding spice to smoky cheese when you’re already balancing it with sweetness can backfire and make it overwhelming. Plus, I didn’t have any. So I went with a simple balsamic reduction, which I actually overcooked a teeny titch so it was almost taffy-like, it was so thick, but boy was it delicious.

The best part of any smoked cheese, aside from the addictive flavour, is that you only need a little (not that that should stop you if you’re on a roll). I cut very thin slices for my grilled cheese and didn’t feel cheated at all.

One more thing: Remember when I said I’d used it in soups? Yeah, don’t. Gouda melts a little too well. I added it to French onion soup, and though the smokiness added a nice depth to the flavour, I regretted it (as much as I can ever regret cheese, anyway, which is minimally) when every bite literally coated my mouth with gum-like gouda. I can’t be sure, but it bore a striking resemblance to what I imagine eating melted Silly Putty would be like.

Minus the flavour. Because that shit was still heavenly, even while trying to scrape it off my teeth with a spoon. 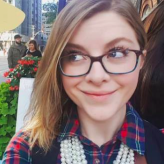 An ode to ricotta, as (imaginarily) sung by Robyn

Ready to cheese the day?